We usually use JOIN to find the intersection between two different tables.  For example, if you want all the orders from the order table who belong to a certain set of customers from the customer table.

This is the most common usage of a JOIN, specifically an INNER JOIN.  The results only include the entries that matchup from each table.  There are many other situations that you can incorporate a JOIN to solve.  Particularly here we are going to talk about using a JOIN to suppress information from one table by using another.

The goal that we have is to generate a list of Keys from the KeyTable that are NOT in the SuppressionTable.  A simple way to accomplish this is using the following SQL which utilizes an sub query to accomplish that.

Here we incorporate a sub query to suppress the Keys.  This method is perfectly acceptable for small amounts of data, also it is simple to understand.  However, it is not an efficient method when you have millions of records in both tables.  In most database engines the code around the JOIN operation is very well optimized.  If the tables are constructed properly a JOIN result can be generated very quickly.

The table below is the result of the FULL OUTER JOIN operation.  You can see from the result set that there are NULL values filled in when there is a entry from on of the JOIN tables that does not have a matching entry for the ON clause in the other table.

We can use this side effect as a filter condition to remove the instances where there is no JOIN value.  Adding a condition in the WHERE clause to suppress anything from the SuppressionTable that has a NULL value.

This query will generate the results that we are looking for as it will display only the unmatched entries from the KeyTable that are not in the SuppressionTable.  While this is a much more efficient method for suppression data from large sets there is still a step further than we can go. 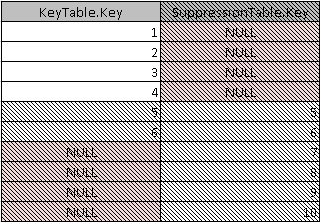 * The Next page contains all the SQL used in this example *