The trip finally was able to happen after all the planning from Part 1.  On Saturday April 26th, 2014 Dad, Debora and I were able to drive into Boston to take the Downeaster Amtrak train from North Station in Boston to Freeport ME.

Since the planning phase my guide and map from the Freeport tourist website arrived, and the Downeaster had a new schedule released.  Thankfully it only changed 1 weekend rout by 5 minutes from the schedule that I have vs. the new schedule.

Dad stayed over night at our house so we could all get into Boston together early in the morning. We were up at 5:45 am and out of the house at 6:15 am. We parked in the parking lot at Government Center at 7:15 am, right at the entrance to the parking lot.

The breakfast that we had hoped for, chorizo & eggs from Quincy Market could not happen.  It never occurred to me that they might not be open by the time we got there.  To our supprise Quincy Market does not open until 10:00am, though I swear I use to get breakfast there much earlier than that before.

We walked down the street to have breakfast at Panera Bread. The breakfast sandwiches were very good, I used the bathroom there, which was a very nice and clean, bathroom (though that could be that it was only that way since we were there at 7:30 in the morning). Once we had our breakfast we stopped in the nicer Dunkin Donuts that was next to Faneuil Hall and proceeded up the road to North Station.  The farmers market was starting to get set up next to Haymarket, everything looked really good.  We made a mental note that one morning we have to come back nice and early to hit the market. 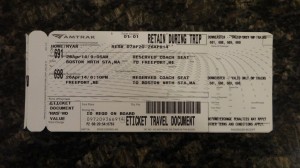 Dad got the train tickets for all of us for the round trip from North Station to Freeport. The train was not there yet so we went through the newsstand for some snacks.   Deb grabbed some chocolate and I got some peanuts.  Dad found another magazine to read for the ride.  We all took turns heading to the North Station bathroom while the others would stay and wait with the bags.  The train that we were going to be taking did not get into North Station until close to 8:30, and it was suppose to have arrived at 8:00am.  I did not know it at the time, but that was what ontime was going to be for the rest of the day for the Downeaster.  I grabbed a coffee from the Dunkin Donuts in the terminal and we waited to be allowed to board. 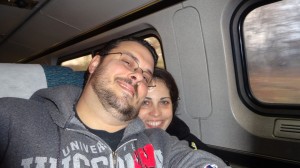 We boarded the train and searched for seats. We were going to sit in one of the 4 facing seats however there was not a lot of leg room from the front seat to the back seat. So we sat one row back, still facing the right way for the trip to Freeport as Deb does not do well traveling backwards.

We pushed away from the terminal and we were off!  The train was a little rocky, some places were worse than others.  I was working on writing a note to myself that I mailed from Freeport about the ride as well as writing in my FieldNotesBrand® notebook.  It was very easy to see that some parts were more bumpy than others.  I do not think it was bad enough to stop me from writing, but it was a good thing to discover before my 23 hour train ride to Chicago this summer. 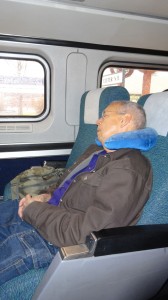 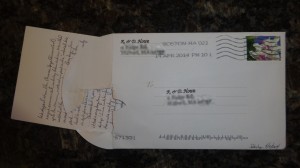 Debora and Dad tried to fall asleep, Dad was able to sleep up until we got to Dover but I do not think that Deb was able to sleep long if at all.  The seats in Coach are a little small and narrow.  If you are a larger person like I am you will be touching the person you are sitting next to.  Not bad at all for a 3 hour ride, but for a long hall there is no way I could do that.  I did not venture up to business class but I do plan to check it out on the ride back.

We made it up to Freeport about 20 minutes behind schedule and were met by the gentlemen who runs the Train and Visitor Center.  There was also someone handing out menus for Petrillo’s Food & Drink, which I thought was a really clever idea. The greater gave us directions to the Freeport Chowder House , which was only two blocks away (Mechanic St).  There was a steady drizzle in Freeport with the temperature in the mid 40s. Even with those conditions there were a lot of people shopping the streets.

The Freeport Chowder House was packed, there was not a seat to sit in (there were only 4 or 5 booths in the entire place) and there were three parties ahead of us waiting to order and find a place to sit. We decided to try our luck somewhere else. It was 1:00 pm and we were hungry. We went a block over on Main Street to Linda Bean’s Maine Kitchen & Topside Tavern. There was a 20 minute wait, but they were flipping tables and moving people through at a good pace.  We decided better to wait a short time then try our luck somewhere else.

The menu was large and we had a hard time deciding what to have for entrees.  To start we wanted to try a couple things so we ordered a cup of clam chowder, a cup of lobster bisque and a plate of fried whole belly clams that we were all going to share.  Everything was very good, though Deb said as good as the lobster bisque was it still did not stand up to her favorite from Quattro. For the entrees Deb and I decided on the lobster roll and Dad got another plate of fried whole belly clams. Everything was delicious, after dinner Deb and Dad did a coffee and Deb got a crazy lemon meringue pie, it was 6″ tall of meringue, if you expand the picture you can see the crazy pie on the table.

After eating we headed to the L.L. Bean outlet store which was down in the small outdoor mall.  There was not a lot there that we were interested in.  I guess you should expect some slim pickings when their flagship store is only a block away.  We did not linger long in the outlet.  From there we split up, Deb wanted to go to the Old Navy outlet store and Dad & I wanted to head to the Orvis outlet store.

On our way to Orvis we were side tracked into the Lids store.  Recently Dad lost his fitted University of Wisconsin hat and he was on the hunt for a new one.  They did not have it and he was contemplating a few different hats in the store, but I was able to talk him out of buying one.  We will be in Wisconsin again this summer and I am sure he will be able to get a new Wisconsin hat while we are there.  The Orvis store was pretty small and there was a very sporadic selection.  I did manage to find a sweater that I had been eying in the catalogue for some time, and it was marked down 50% off, and it was my size.  Needless to say, I was pretty happy.  Surprisingly Dad did not walk out with anything, Orvis is one of his favorite places to catalogue shop, and he went back to look at a few things more than once.  Two stores in a row that Dad left empty handed from.

We stopped in a couple stores on our way up to the L.L. Bean flagship store.  But only to poke our heads in, see nothing of interest and then continue on our way up the hill.  We came in through the cafe on the ground floor.  I called Debora to see where she was and how she was making out on her stops.  She meet up with us in the cafe, where we took a little break to have a coffee and some water and rest.

We spent a couple hours shopping through L.L. Bean.  It was fun, we all got something while we were there.  I got the main thing that I wanted to take the trip for … my replacement backpack.  The original one that I bought years ago was finally beyond the ability to fix it with duct tape.

We did one more stop in the cafe in L.L. Bean to rest and gather our things.  No one was hungry right then for dinner, but the train ride is 3 hours and who knows how the food in the cafe car was going to be.  So I stopped to get us some sandwiches to go at Pertrillo’s (I kept the menu they handed out when we got off the train and the sandwiches looked good).  Deb wanted to stop in the chocolate shop and Dad wanted to stop in the kitchen gadget shop.  So we split up and agreed to meet at Petrillo’s. 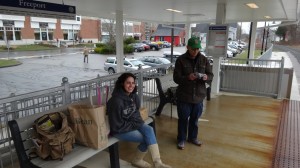 We had a beer while we were waiting for the sandwiches and then we were out of time.  It was time to get on the train platform and wait a short wait for the train to arrive.  The gentlemen that ran the train depot came over to check on everyone before the train arrived, and then to introduce us to tonights conductor.  The train was right on time, but since we are only the second stop going this direction, I guess that should be expected.

It was a long day and being able to just sit in the train and not have to drive ourselves home was very nice.  I ate my sandwich half way back to North Station.  It was a Haddock sandwich and it was very good!  We got to North Station about 30 minutes late, 9:50 pm.  It was Saturday night in Boston and the party crowd was starting to get into the city.  Once we got back to the cars we split up.  Dad was heading home to Jamestown and Deb and I were heading back to Milford.

Such a great time!